The Inaugural DGC League powered by Vredestein Tryes was a success beyond our expectations and I would like to begin this article by thanking the Members, the Team Owners, Sponsors and the Organisers for their whole hearted sporting efforts and participation. As the Captain remarked, echoing the sentiments of nearly all the participants, that we have not seen such a “Buzz and Atmosphere” in the Club. And so many members got to make new friends and also experience playing under some serious pressure. It was Fun to watch.

When we set out to put the League together in Jan-Feb 21, we were fighting time and wanted to conduct it in April. A lot of things were done on war footing, including identifying and selecting the partners to market and run the league. Once we had been through the selection process, we set a target of 12 teams to begin the league. And in very short time, and inspite of the COVID conditions, the selected teams of Gran Canaria and Digraj Golf Inc managed 18 teams and several good sponsors. Then COVID hit us and we had to postpone the event. Here I would like to reiterate that we are grateful that the Team Owners and Sponsors continued their support and both Vishal and Digraj used the delay to get some more sponsors and also plan the event better. The results are there for all to see.

The league, with 18 teams, with 18 players in each team was played in two stages. During the first round robin stage there were 4 groups. Two with four teams and two with 5 teams. The teams in each group, played against each other. In each match, against another team, 7 pairs were selected to represent a team, where the owners were assisted by some of the finest mentors India can find. Each pair from a team played against a pair from the other team in a “Four Ball better Ball” format with each player playing off 75 % of her/his original handicap. Each win gave a team two points and winning a bye gave each team half a point. And the cumulative total of points during the round robin stage helped identify the top two teams in each group, who made it for the Knock out stage.

And then it became really exciting.

Once the 8 teams had qualified for the knock out stage, from the Quarter finals onwards the matches escalated in intensity and passion with loud cheers being heard across the golf course. Several matches came down the wire and were decided on the last hole with the score of the innovative “bye” deciding the result between two teams. A “bye” came into play as soon as any pair won a match and if there were still holes left to be played. The remaining holes were then played for a new match with half a point going to the winners.

In the Semi Finals Team BMW Deutsche Motoren won against Baale Golf with half a point from the “bye” edging them through with the score reading 8 points versus 7.5 for Baale Golf. In the other semi final match K Devils edged past Delhi Tigers (9.5 – 6)

During the Round Robin stage, noteworthy performances included Kapil Kathpalia and Jaideep Ahuja from the team SwingKKings coming back from 6 down with 7 holes to play, winning all the last 7 holes to beat the experienced pair of Randhir Brar and Poonam Beesla of team Radvin Birdie Machine. Tremendous individual performances included Bikram Singh from Team Coca Cola, playing off a revised handicap of 2, firing 7 birdies in his final game to help his team Coca Cola take pole position.

One interesting element of the tournament was the handicap reductions which came into play whenever any player had won two back to back matches. 102 players from the final starting field of 308 thus had their handicaps reduced, leading to better balanced contests. 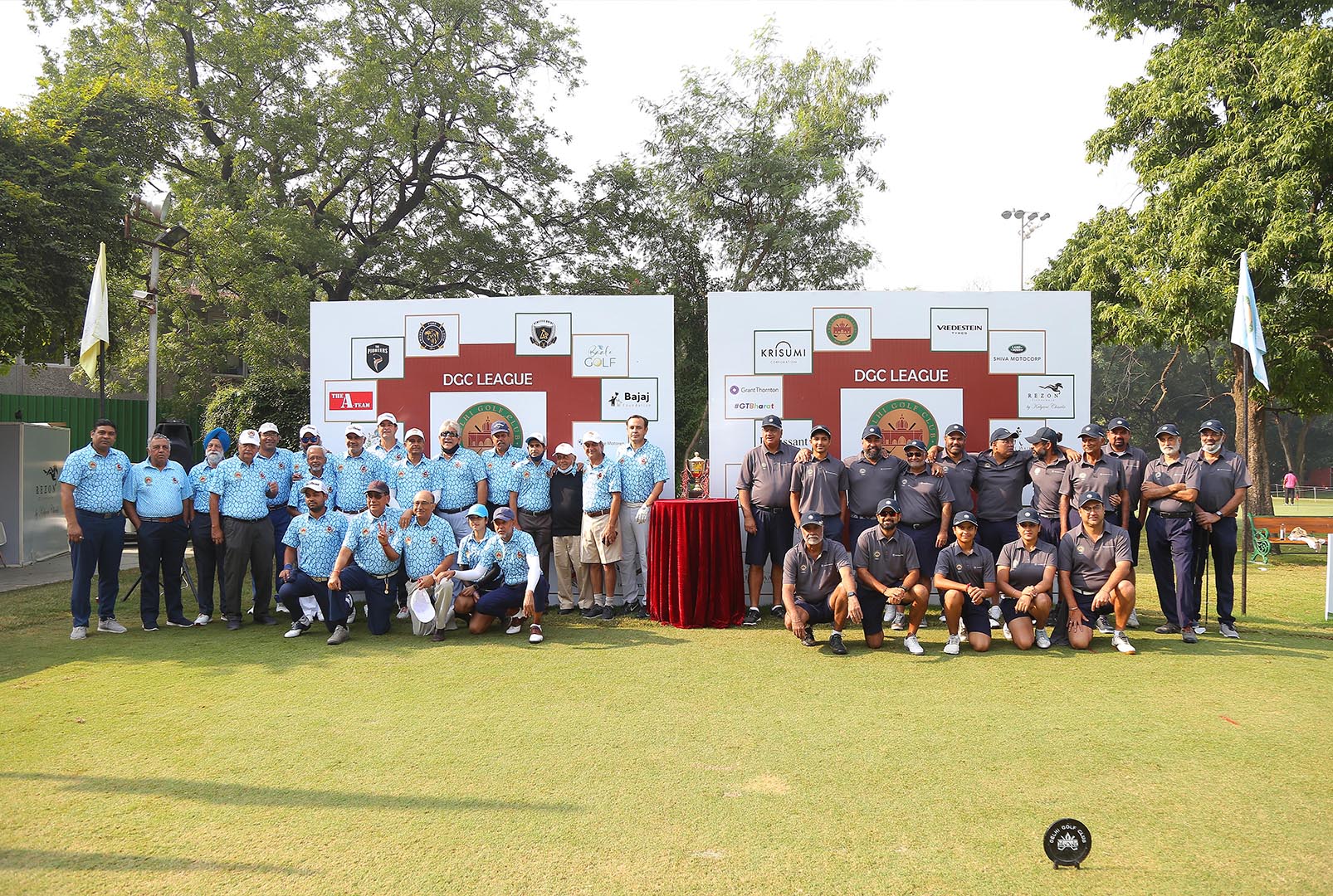 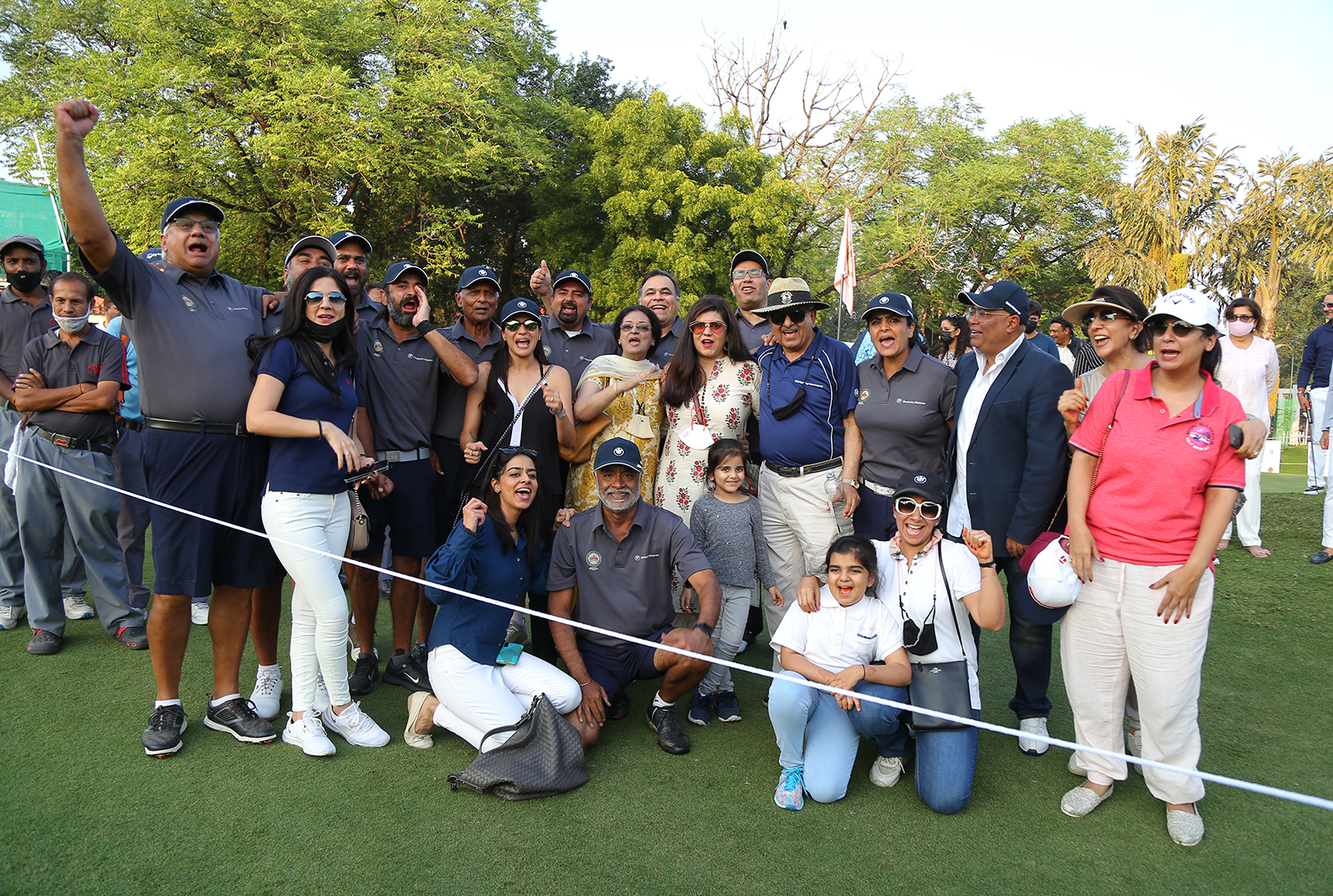 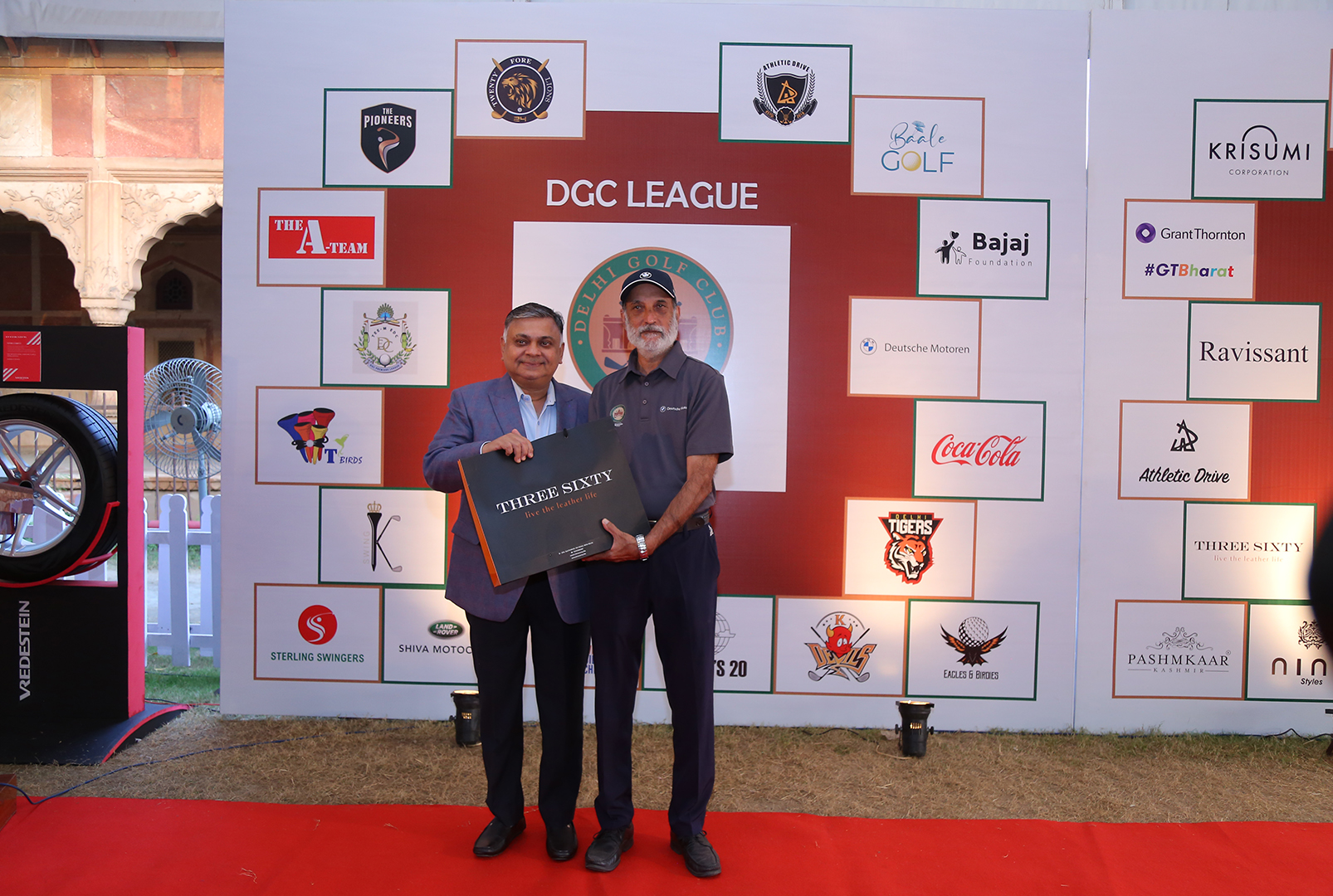 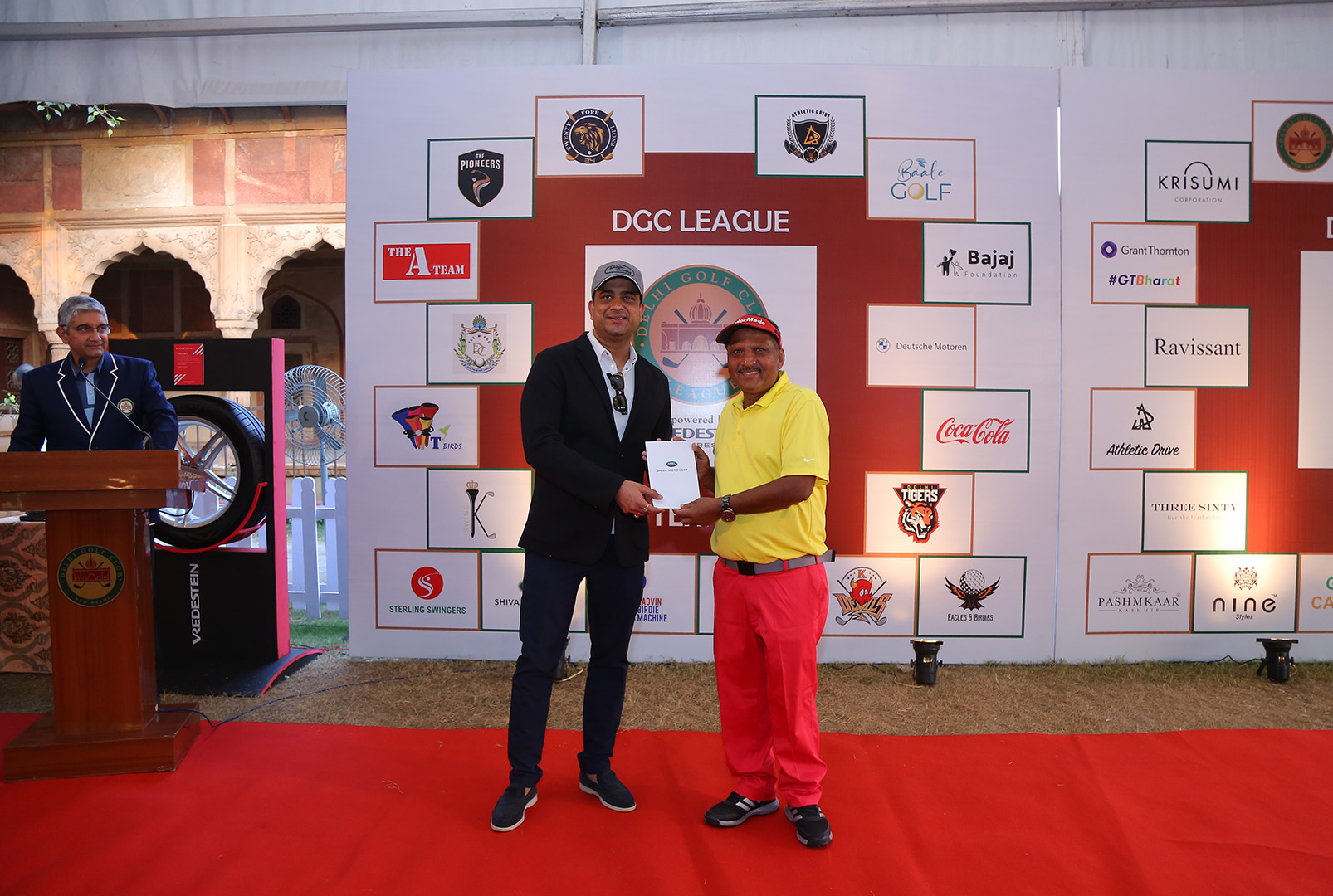 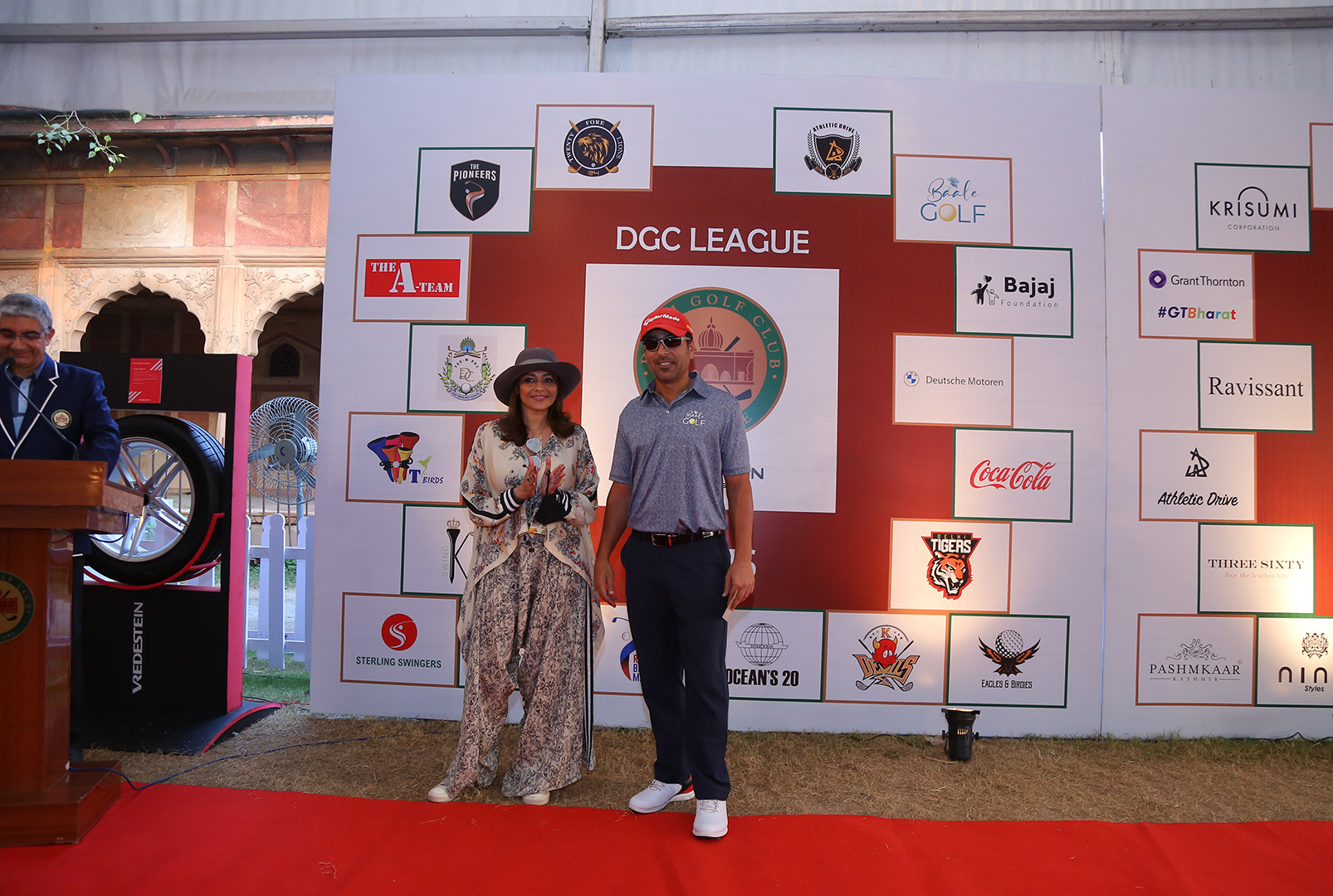 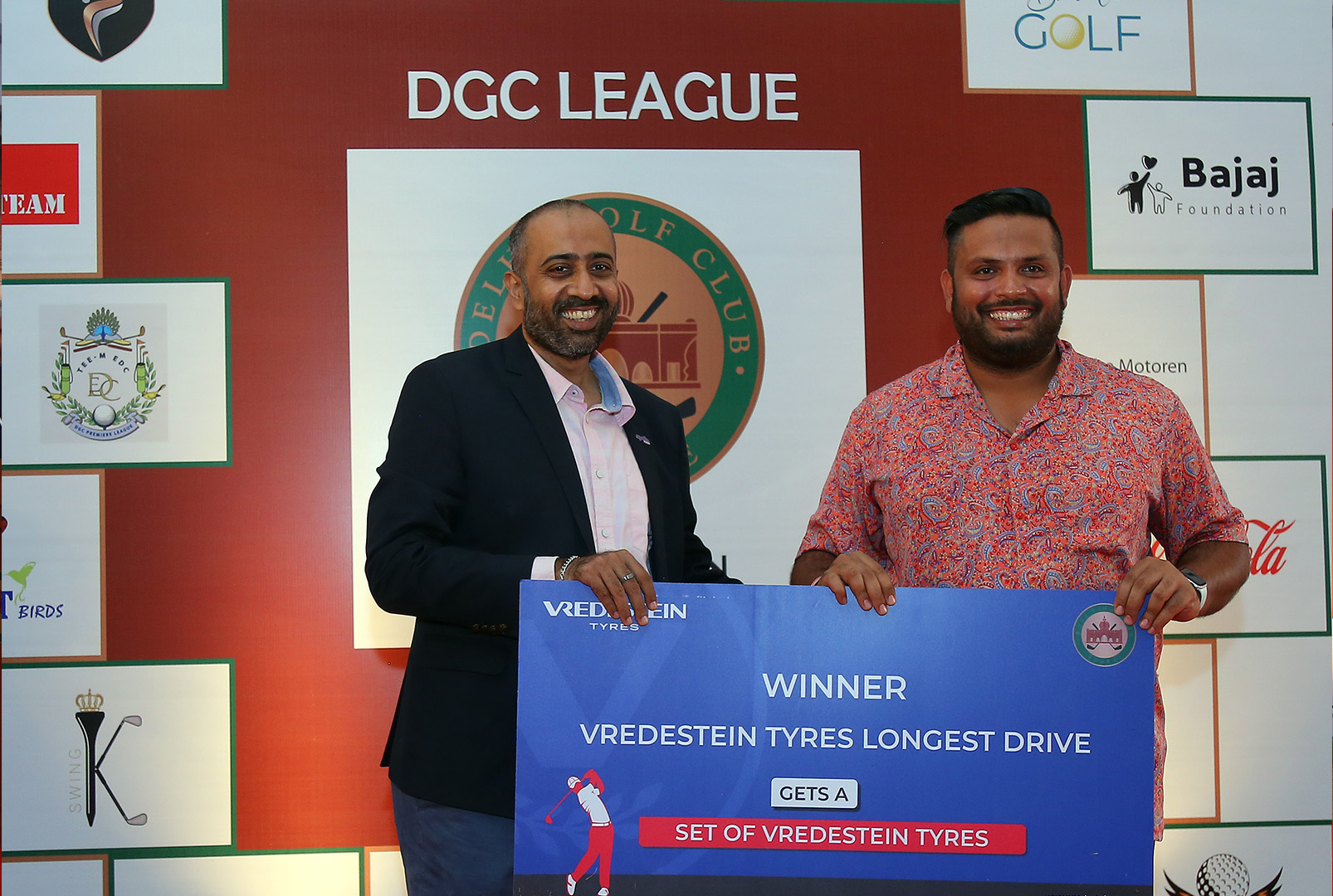 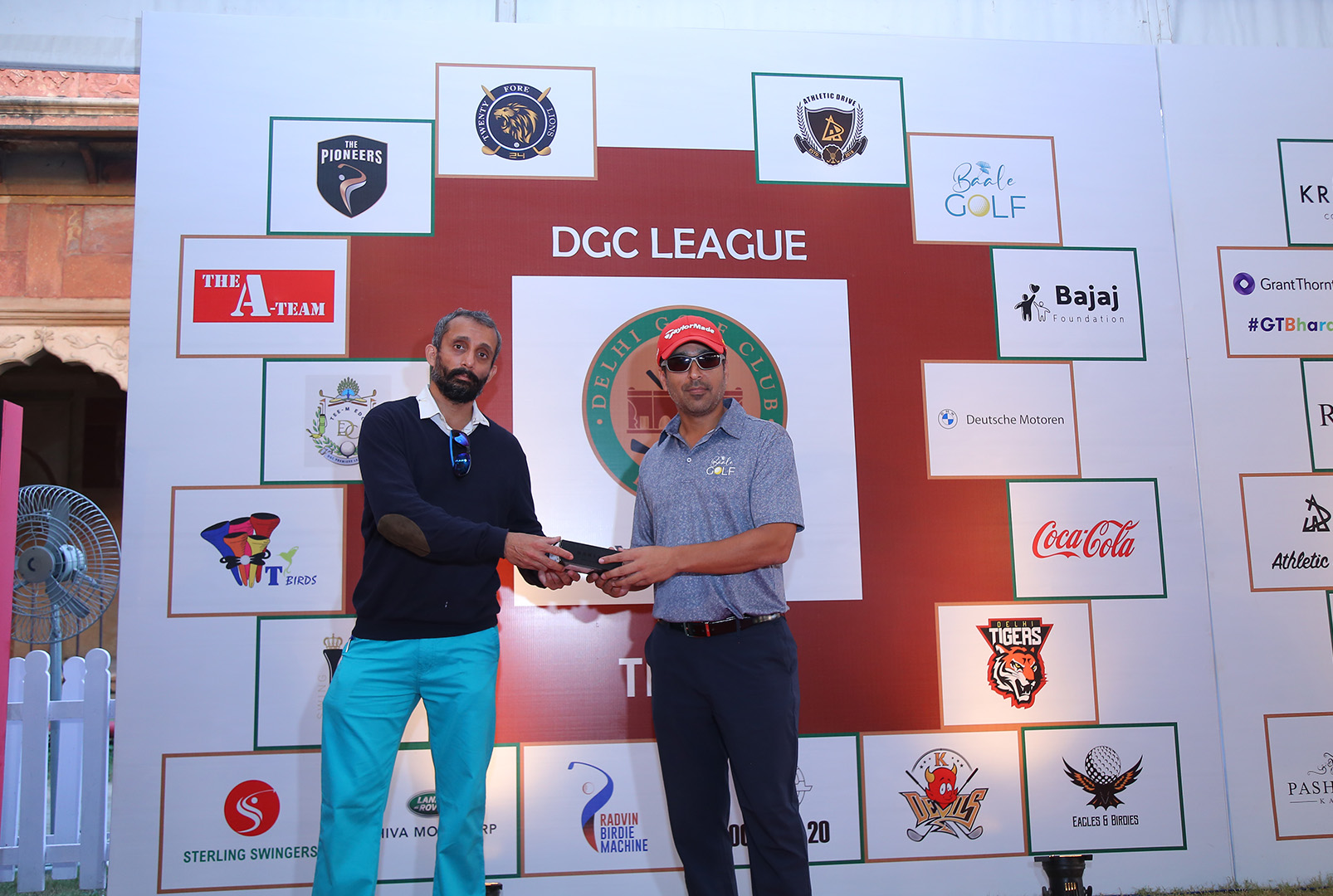 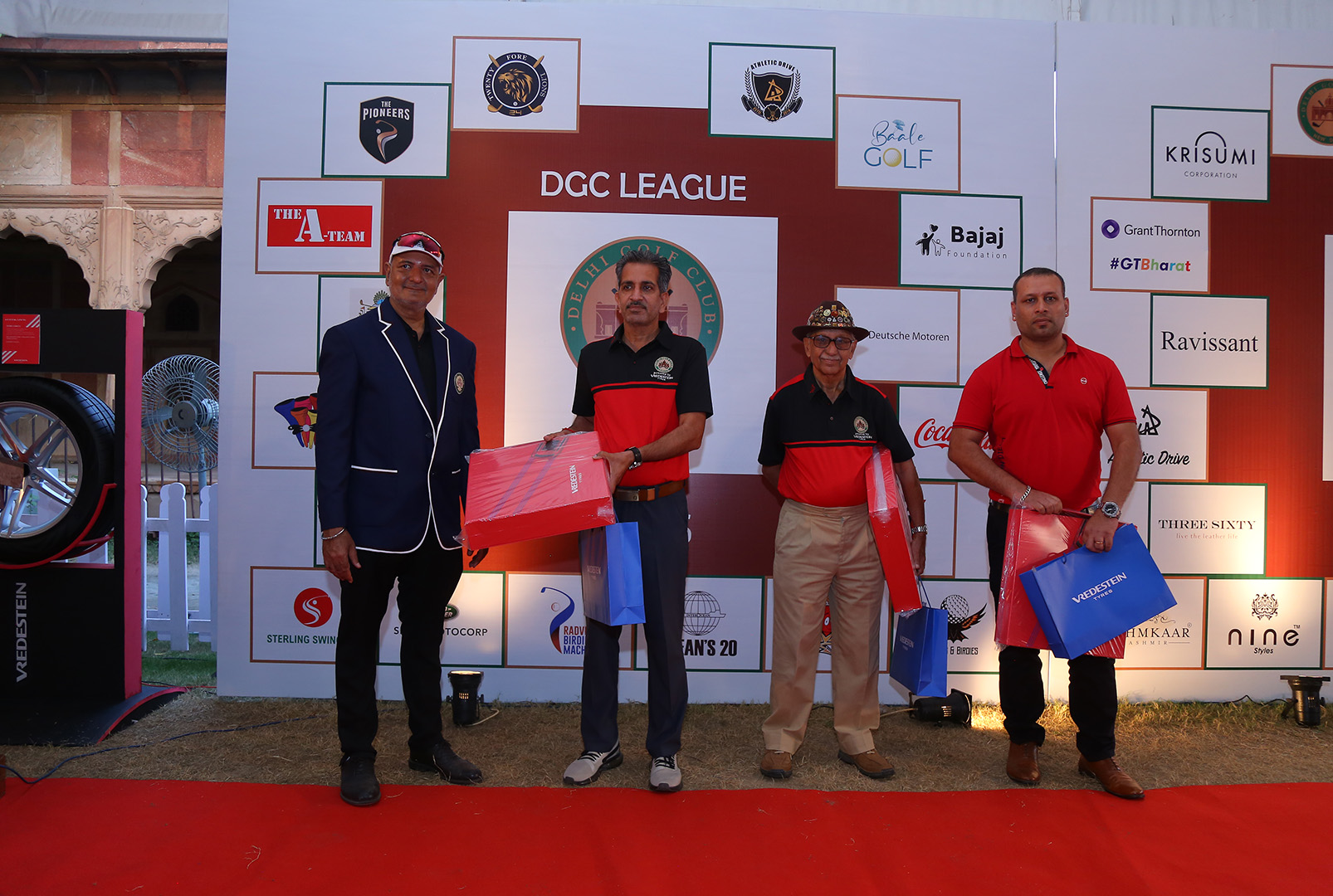 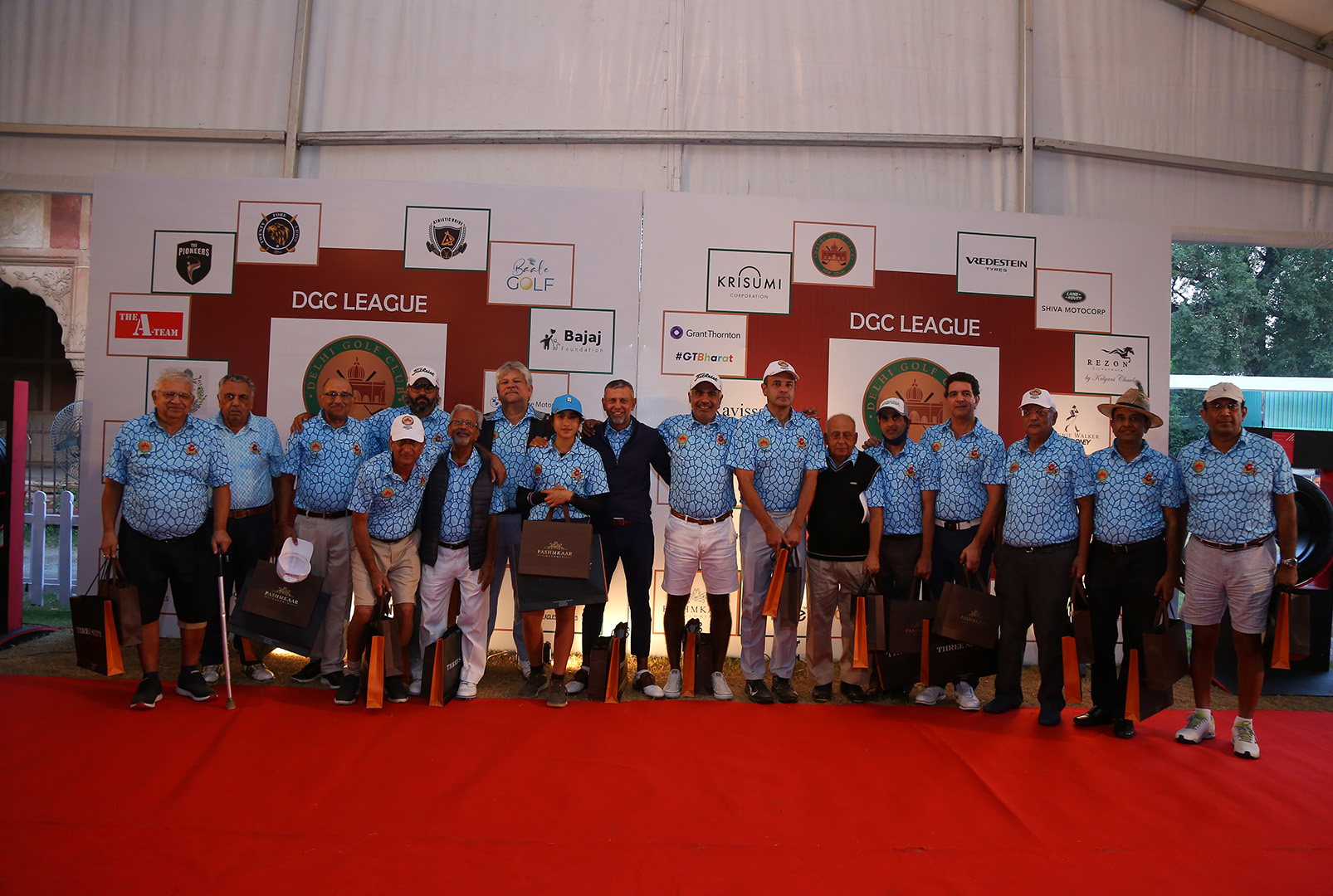 The finals was closely a contested affair but the spirited BMW Deutsche Motoren team finally edged through to beat fancied Team K Devils with a score of 9 points against 6.5 and claimed the Gold Plated Championship Trophy. Team BMW Deutsche Motoren won four of the matches and drew one from the total of seven matches played against K Devils.

The event achieved our twin objectives of promoting talent and also building camaraderie amongst the members and my compliments to all the stakeholders involved with the conduct of the event, especially Vishal, Digraj and Varun Khanna for their untiring efforts.

Representing the true spirit for the game, competitors Kapil Dev and Shamsher Dhupia in the Finals 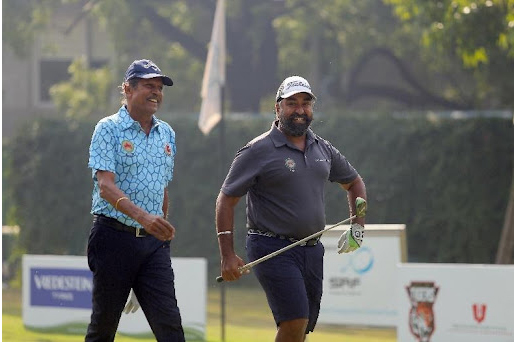 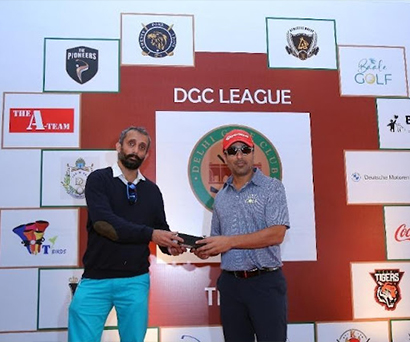 Bam!!! We’re in the semis.. If I were to go back just a few months, I couldn’t have ever imagined that I’d play some of the most exciting and exhilarating few rounds of golf I’ve ever played. And I mean nail biting, hand quivering, sleep deprived exciting to a different level. Definitely not where us usual club golfers have been. There were times during a round where I felt I was shouting at a soccer game! The Delhi Golf Club league got off to a really loud BANG!

Organized incredibly well with the help of a handful of extraordinary super men and women, the league is represented well with all ages and handicaps of golfers. Eighteen teams with eighteen players a piece makes a pretty darn inclusive event. The family of The Delhi Golf Club just got a lot closer; we played outside our usual games and met a whole new bunch of crazy interesting personalities.

Our team “Baale” had a family feel from the get-go. Little did I know it would become a breeding ground for sharks. It brought out the heavy weight fighter that few of us knew existed within us. One thought the game of golf to be crazy addictive before, just sprinkle a little league and see what happens!

On one particular match day, I shanked 6 consecutive shots on the range before getting on the 1st tee only to pull it left! That day my partner and I didn’t play the first two holes, not because we didn’t want to, we just couldn’t! On the 3rd we re-grouped and fought till the last putt. Surprisingly we went on to win that day! It’s quite amazing what the league did to us.

During a particularly intense quarter final match some of us from team Baale were following our group on the 17th green. As we moved to the 18th tee, we heard a deafening roar, from half a km away. Was it an A380 landing? Nope, Team BMW just won their match! I wish I could describe the feeling and intensity of that roar more clearly but it was akin to nothing I had witnessed before.

There’s a lull after the storm that was the league, and there’s us at Team Baale playing the same format, pairings, stroking and waiting eagerly for the opportunity to win next year. Until then – happy golfing! 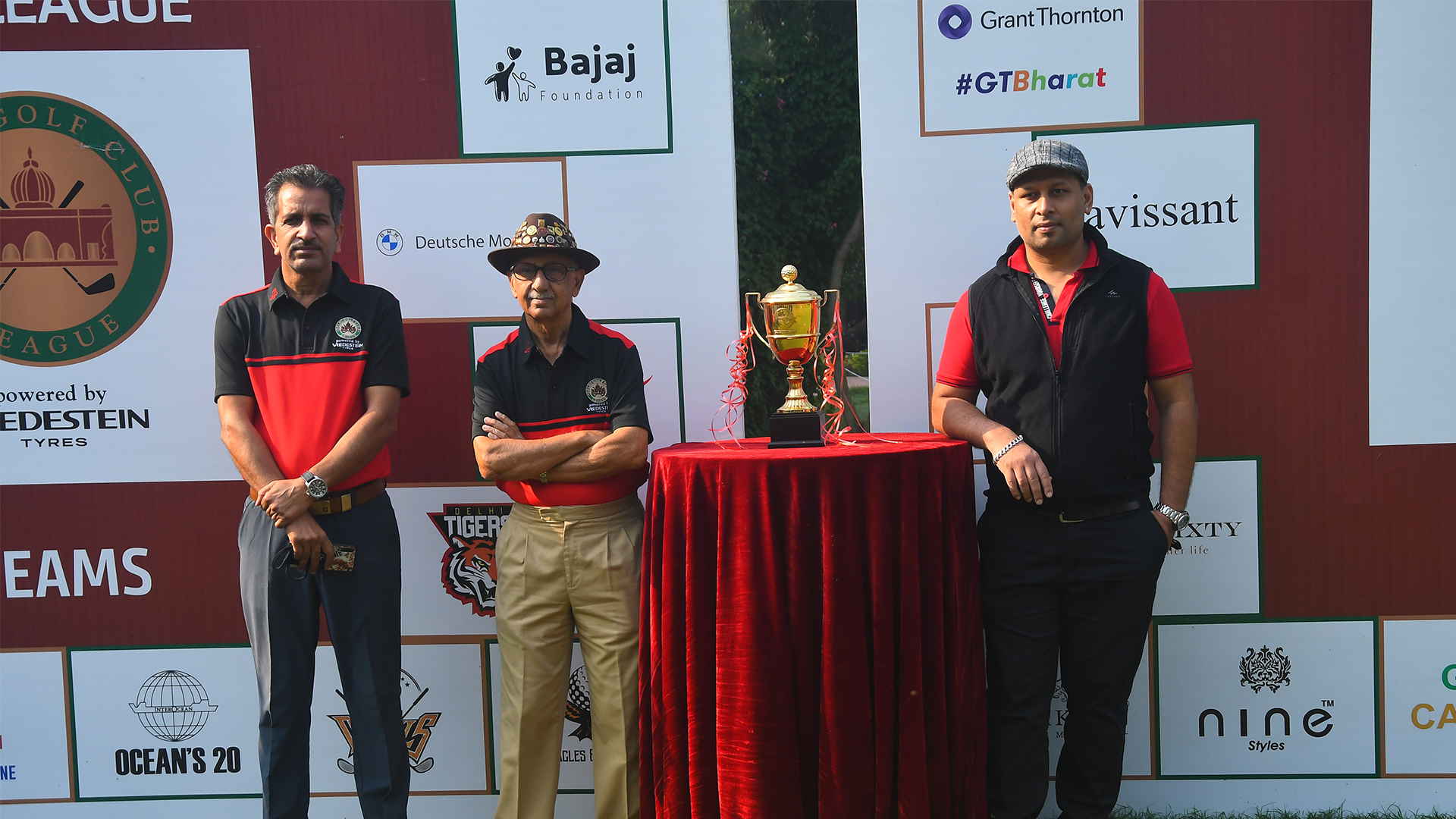 THE DELHI GOLF CLUB has partnered with Msssrs Gran Canaria (Vishal Chawla) and Digraj Golf Inc to market and manage the DGC League.

The run away success of the Inaugural edition was a testament to the fact that it was packaged and managed well and run in close coordination and under the supervision of DGC.

The following association Opportunities are available: 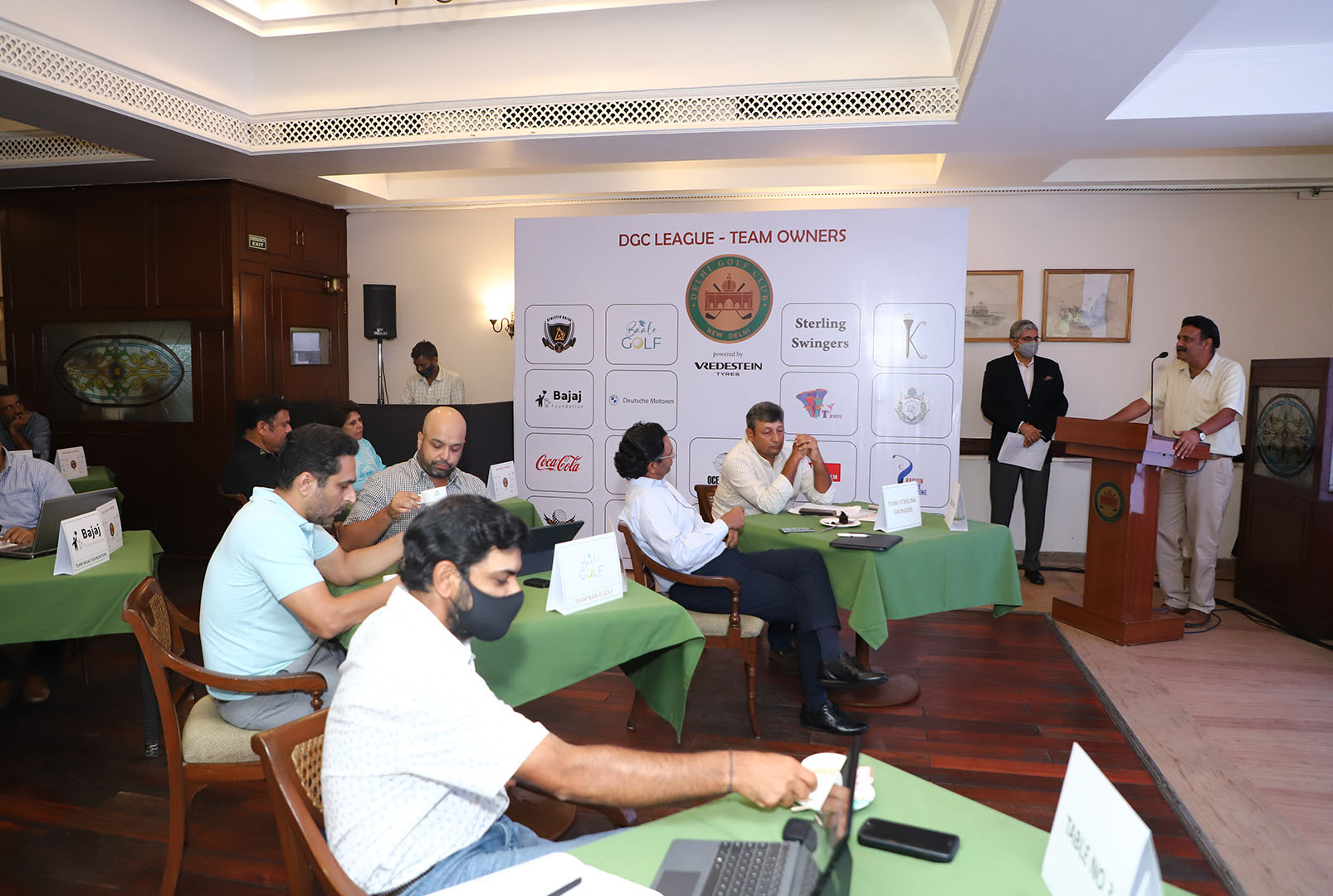 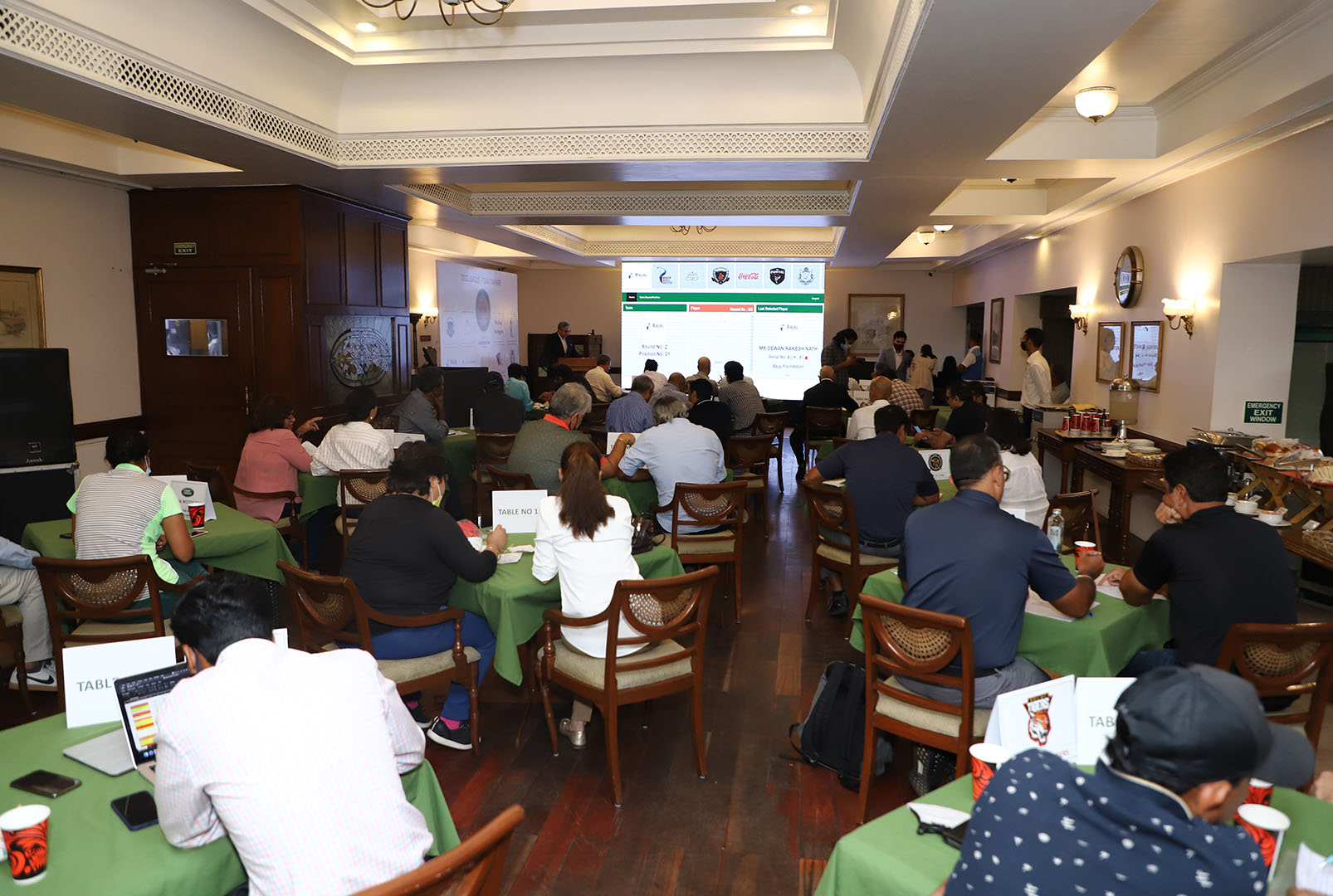 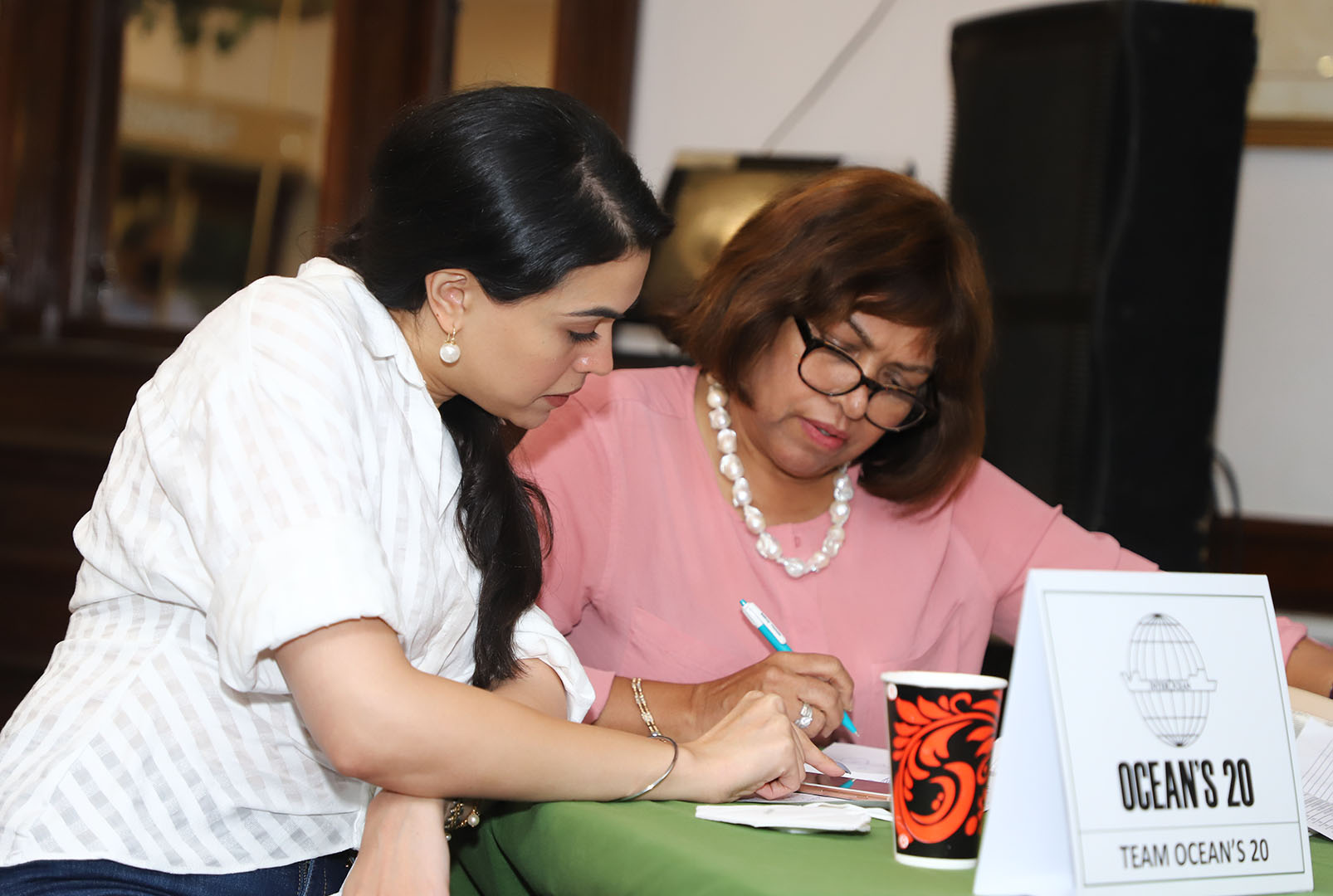 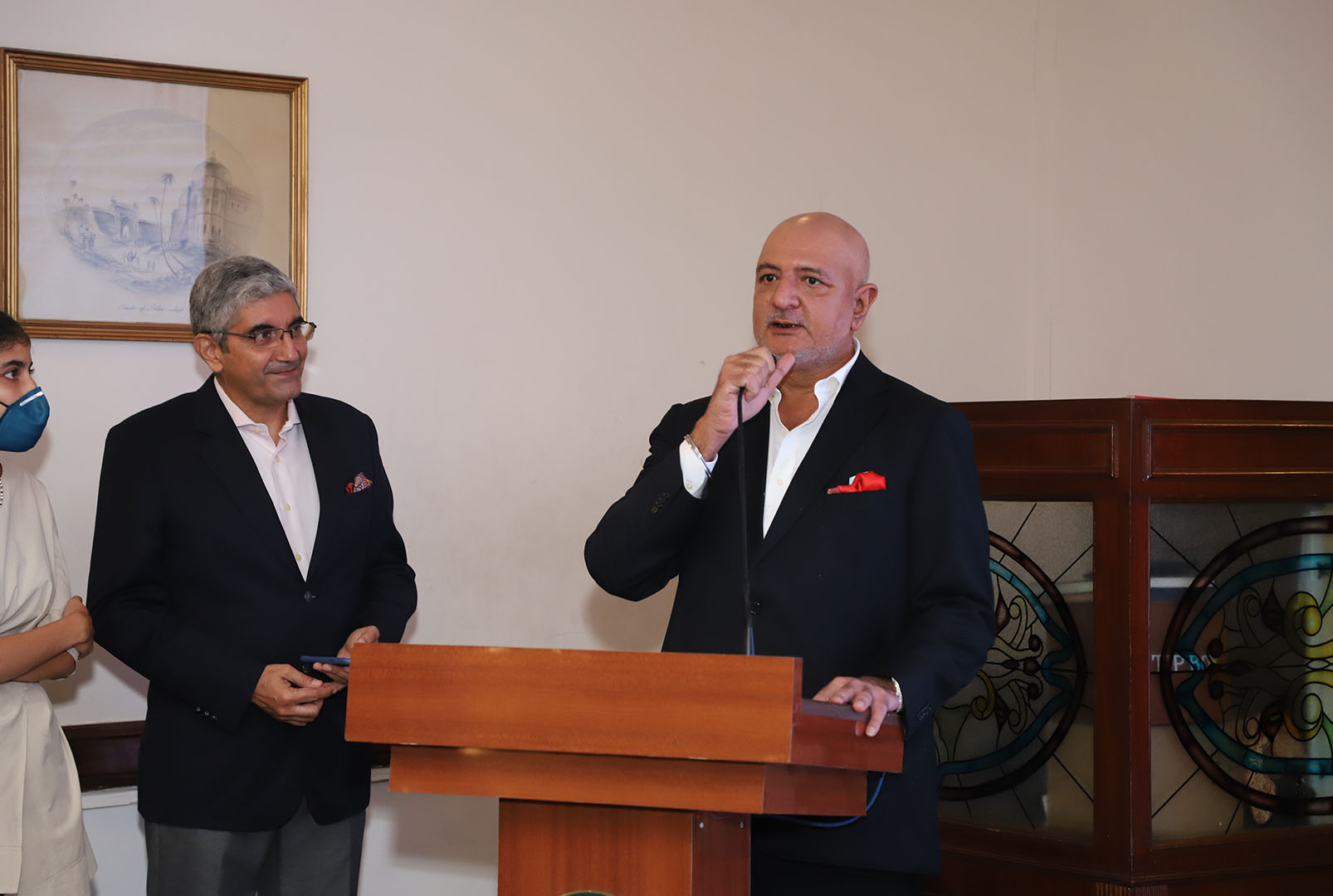 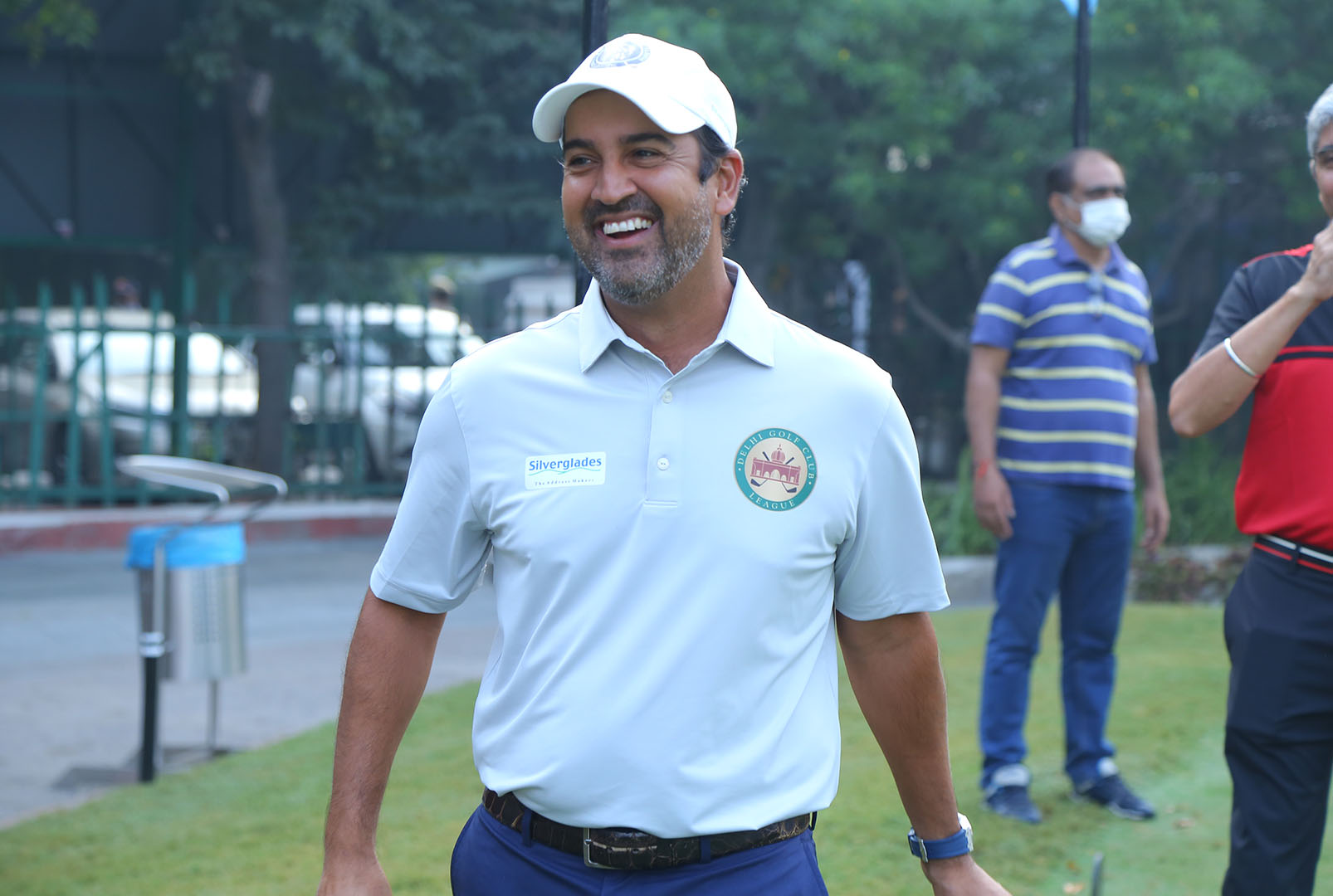 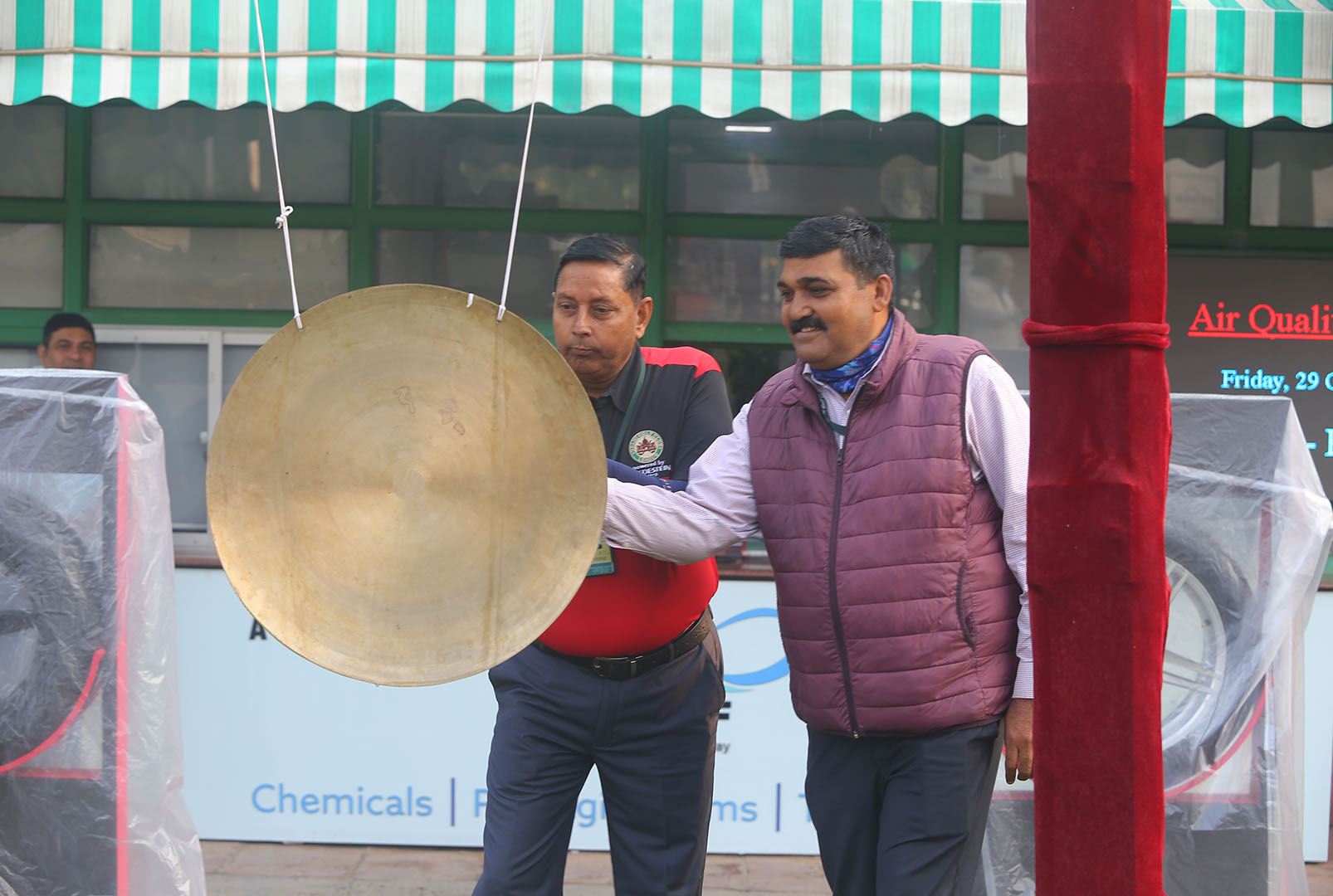 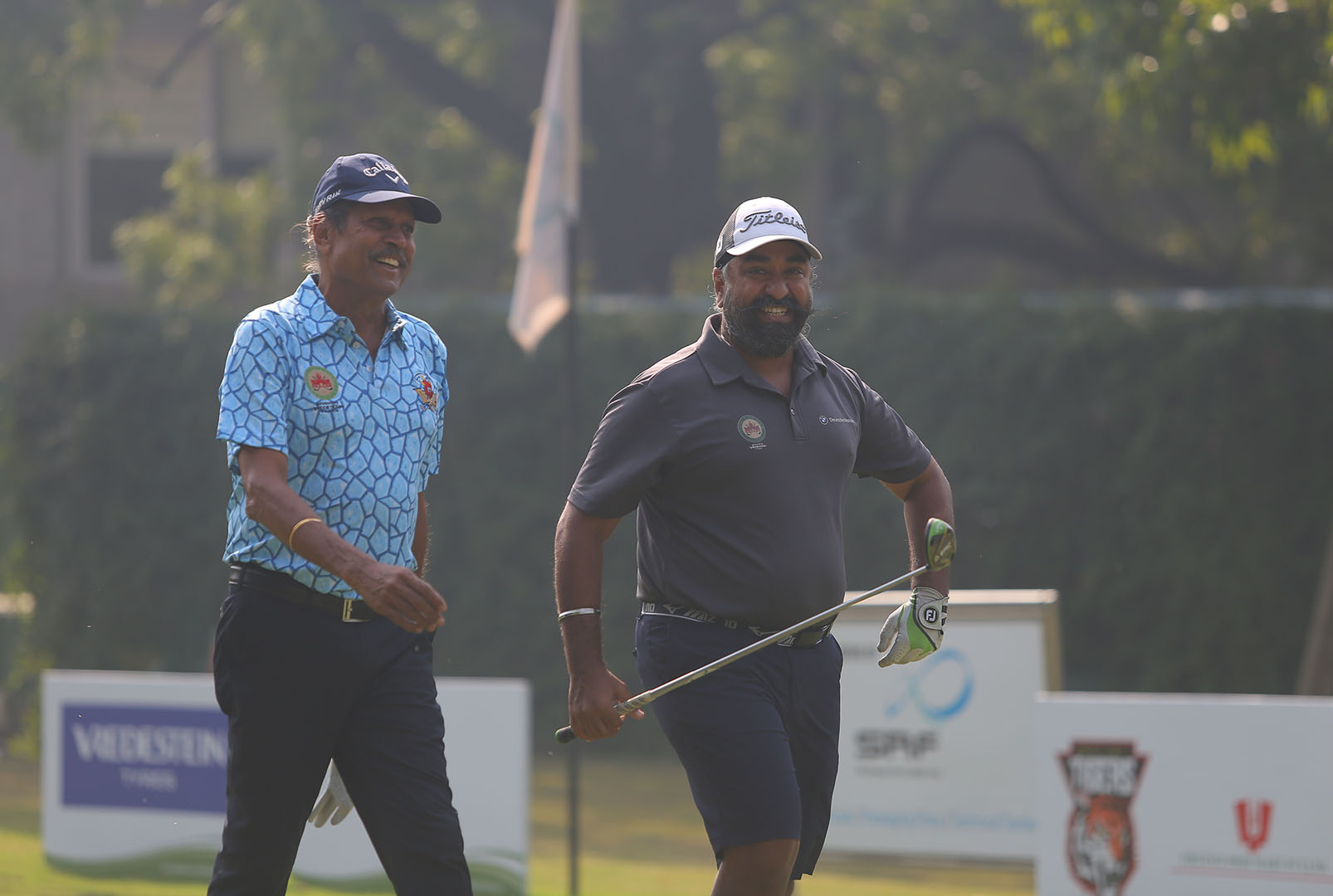 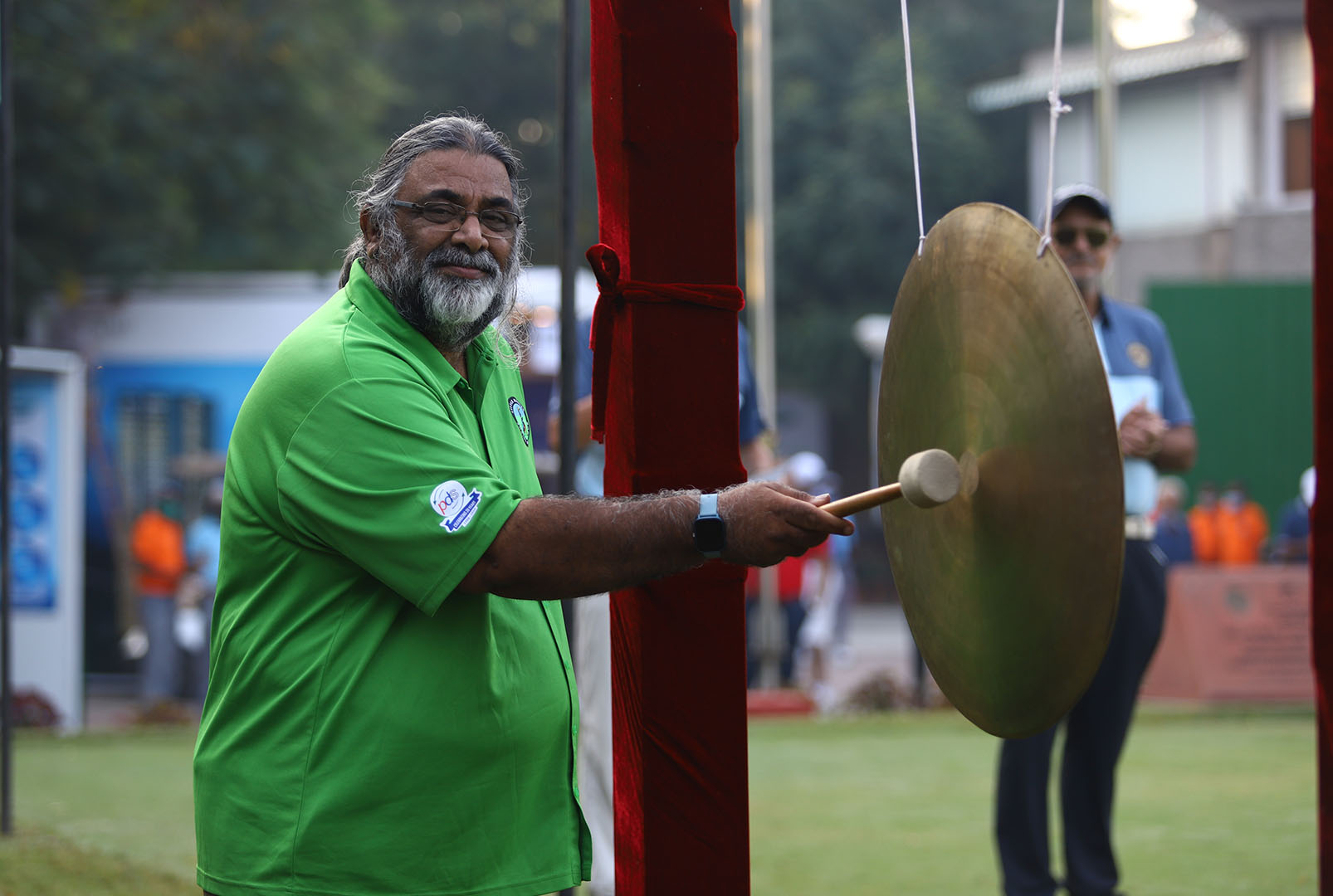 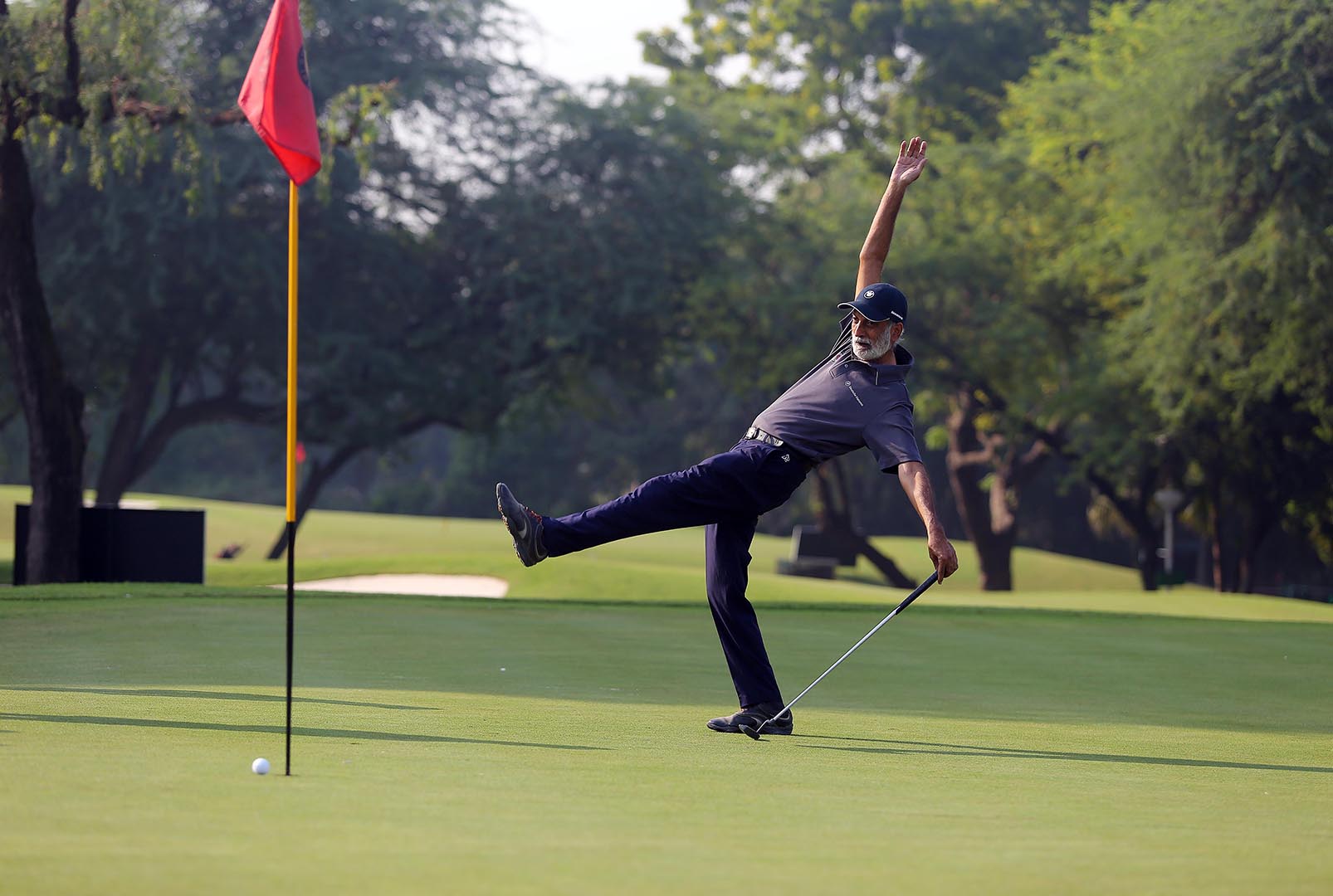 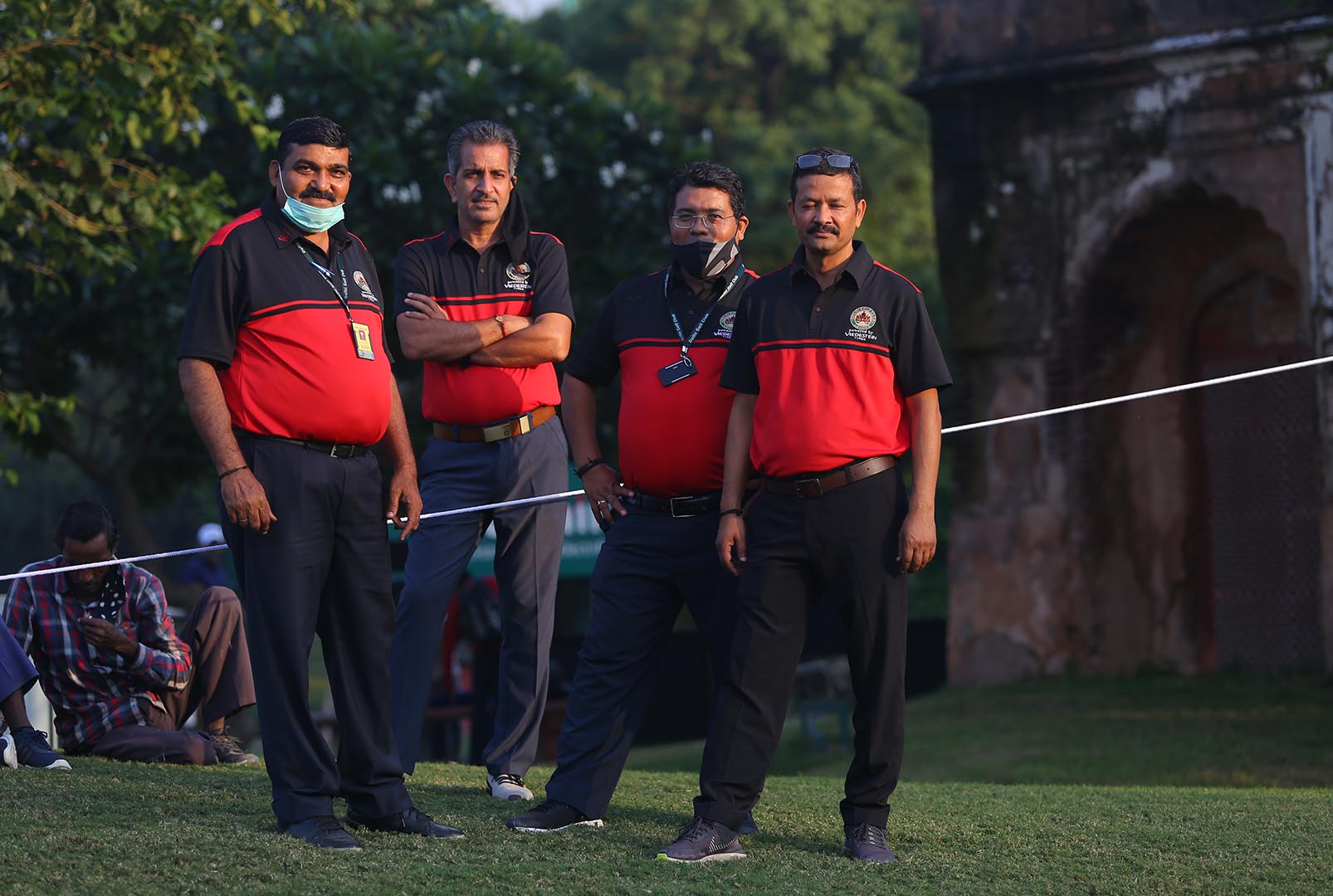 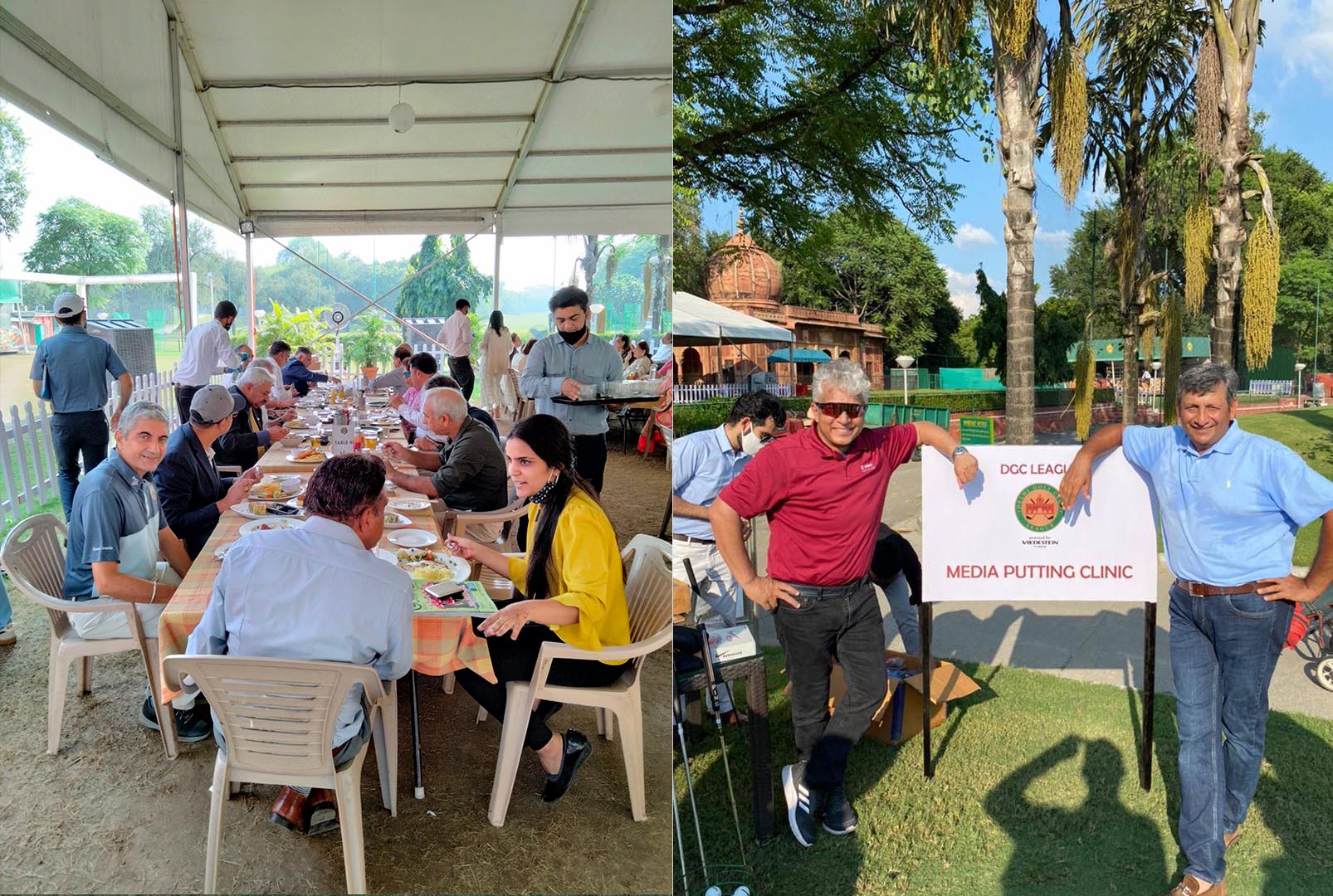